Staying informed with what’s going on in the world is just as important as reading up on thought-provoking books that explore issues of race. Incorporating theories that are rooted in Black thought, analytical essays and fiction stories centered on Black narratives into our reading diets gives us a new window to look through when critically looking at current events.

I asked friends who are also in Stony Brook University’s School of Journalism to put together a few of their favorite reads and discuss the significance in the critical race theories and narratives that are tackled in their selected books.

1. “So You Want To Talk About Race” By Ijeoma Oluo

The New York Times bestseller, published in 2018, examines race in America by going through topics, like intersectionality, affirmative action and “model minorities,” and applying those concepts to issues of police brutality and mass incarceration of Black Americans.

“This book helped me better frame conversations about race and gave historical context and facts to present when addressing microaggressions, overt racist statements and implicit bias,” said junior journalism major Julio Taku. “I read it at a time when conversations about race were frequent and consecutive. I’ve even revisited it for talking points and used it to guide discussions.”

2. “How To Be Less Stupid About Race” By Crystal M. Fleming

Published in 2018, Fleming’s book breaks down misconceptions about race that are represented in schools, media, popular culture and politics to challenge national discourses that do not effectively address systemic racism.

“I had the honor of taking Professor Fleming’s course on race in my sophomore year and she used the same brevity, intelligence and command of material in the classroom as in her book,” said Taku. “This book pulled no punches in regards to calling out white fragility and the harm it does.”

3. “Medical Apartheid” By Harriet A. Washington

Washington traces the history of Black America’s dehumanization as Black slaves and then freedmen when they became experimental subjects on the quest to expand medical research. “Medical Apartheid” demonstrates the ways in which the eugenics movement of the 20th century and Western medicine justified the exploitation of Black bodies.

“This novel sheds light on America’s history of unethical experimentation on Black people,” said senior journalism major Lajiere Blake. “A lot of the medical experimentation of the past impacts the present. Today we see the distrust between Black people and the medical industry and this novel does a great job of explaining the historical context behind that. It can get heavy at times but it’s worth the read.”

Smith’s “On Beauty” centers on two families with very different political ideas and cultural values. The characters’ challenges in figuring out their complex identities illuminates the struggles in embracing “Blackness,” the institution of marriage and finding spaces of belonging.

“This fiction book follows the lives of an interracial family as they grow apart and are impacted by common life changes,” said Blake. “Although the family is mixed with Black and white, there is a universal quality to the novel that I love. It tackles the difficulty of finding your identity within such a binary world so well!”

Ture was among one the most prominent leaders of Black militancy in the U.S. during the 1960s. He coined the phrase “Black Power” when he was the prime minister of the Black Panther Party. “Black Power” exposes the country’s deep-rooted racism, while discussing a radical political framework for reform that involves unifying Black Americans.

“I found it really profound because he breaks down white supremacy, as well as Black power theory – and how white supremacy functions in systems,” said Sarah Beckford, a junior journalism major. “It’s a really great read, and I’ve enjoyed studying it over the past year.”

“‘The Hate U Give’ is an incredibly moving book,” said Beckford. “It’s so relatable because the main character, Starr, has to navigate her hometown while attending a private school that’s predominately white. That navigating of two starkly different worlds hit home for me, and I believe it puts in perspective how systemic racism affects Black people in education and in how they conduct themselves. This becomes more apparent once her friend dies because of police brutality. So that adds to the intensity of the book as well.”

“I remember being assigned ‘Copper Sun’ in middle school, and I was so thrilled to be learning about the deeper history of slavery and being able to connect with my roots,” said junior journalism major Maya Brown. “Before this book, I don’t think I had much exposure to Black authors. I value this book because it follows the journey of Amari, a 15-year-old slave, who endured the horrors of bondage and uses everything she has to survive and conquer. When I read this book, I realized that we need to talk about slavery and the evils of the past because that is the only way to learn, reflect and educate. This book even inspired me to write my own version of ‘Copper Sun,’ a diary of a young slave in Kenya. It inspired me to do research and write myself.” 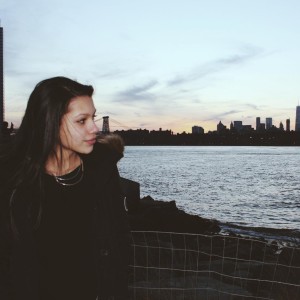 My name is Cindy Mizaku, and I am a senior at Stony Brook University’s School of Journalism. I am interested in reporting on foreign relations as well as arts and culture. I am currently the opinions editor at The Statesman where I guide writers, edit and publish their work. I also write for the news section, covering campus events and news for the student campus community.